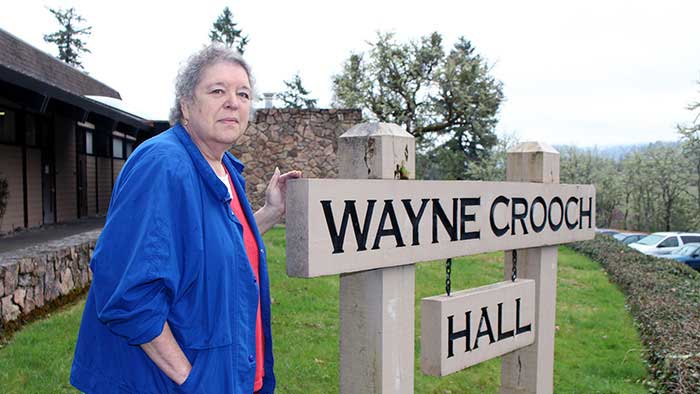 Kathy’s donation includes a framed aerial image of the campus—long before the Whipple Fine Arts Center and Educational Skills Building came to be—along with a picture of Crooch taken at the campus fountain in front of the building that bears his name and a letter that commemorates the building naming.

“These [items] have been hanging in our family homes for years,” Kathy said. “As time has gone by, I came to the conclusion that this is the most logical place for them to live now.”

Kathy reflects back to the days she would roam the campus as a young child. She says her dad’s work to bring UCC here started in 1959. She remembers walking the campus when only four buildings existed.

“Back then, before all of this was built, students were everywhere,” she said. “The Chevy dealership in town allowed automotive students to take their classes in the shop. Even the local churches hosted classes. A lot has changed since then.”

Kathy graduated from Roseburg High School in 1967. She started her studies at UCC in September that year and graduated with an associate degree in business in 1969. She married a military man the following year and moved away from the area.

While her father had a significant impact on UCC’s creation, Kathy left her mark here as well. She was one of the people who helped set up part of the campus that is still used today.

“I was here to help set up the library,” she said. “Mrs. Crane was the librarian, and all of the books were donated. That is how and where I spent my free time back then.”

Kathy’s travels don’t bring her to Douglas County very often. She lives in Lincoln City and is now only one of two family members left. During her visit, she drove down memory lane to look at the homes in her old neighborhood. She also walked the campus—making a deliberate trek up the hill to Jacoby Auditorium. She wanted to pay tribute to the man it’s named after; another person she actually knew.