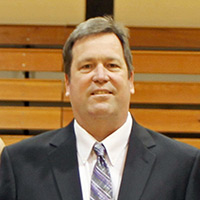 Ever since he began his coaching career, Dave Stricklin has been synonymous with success. In eight seasons at Golden West College in Huntington Beach, California, Stricklin’s teams posted an overall record of 259-27 and won seven championships.

The winning ways continued immediately at UCC with the Riverhawks (Then known as the Timberwomen before Umpqua changed its mascot) racking up 25 wins and shattering 14 school and NWAACC records. The very next year UCC won the first NWAACC (Pacific Northwest) Championship in school history with a 29-4 record and has been considered one of the premier programs on the West Coast ever since.

Coach Stricklin is also a contributing author at Hoop Skills (www.hoopskills.com) a web site devoted to the education and improvement of players and coaches. He is also one of the co-creators of Basketball Classroom (www.basketballclassroom.com) which is a modular online clinic which instructs and mentors coaches all over the country.

UCC will be CLOSED Monday, Feb. 17 in honor of Presidents' Day.