Overcoming Fear to Answer the Call to Care 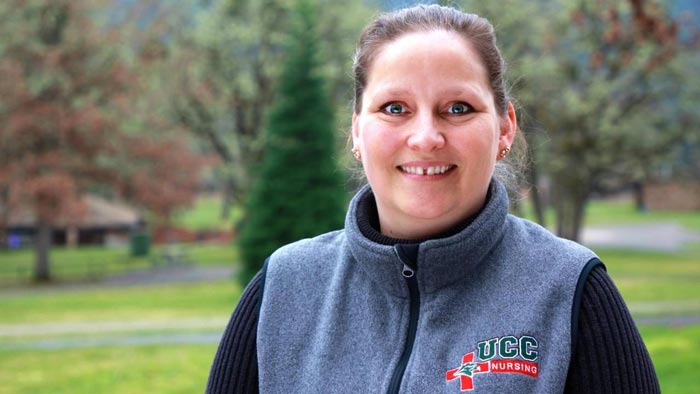 UCC graduate April Myler has two perspectives on the College's Nursing program; one as a student, one as its leader.

ROSEBURG, Oregon – When April Myler started her studies at Umpqua Community College (UCC), she had no idea she would be where she is today. Now UCC’s Director of Nursing and Chair of the Health Sciences Department, April is a very long way from where she started. After taking a decade to overcome her fear of math, she took the confident steps she needed to answer the call to care.

“I almost didn’t go to college because I was really nervous about math,” she said. “It had been 10 years since I graduated from high school and that fear almost got me. It was then I decided to work with the staff at UCC’s Woolley Center to freshen up my skills.”

When April graduated from Douglas High School in 1994, she got through life like most people—just thinking about work and not necessarily school. A decade later, at the age of 28, the then-mom to an eight-year-old son and twin two-year-old daughters, April told herself when her girls turned two, she would buckle down and go to school. True to her decision, she started taking classes at UCC in the Fall of 2004.

“When I was younger, I thought about being a teacher,” she said. “But after spending a lot of time in the neonatal intensive care unit with premature twins, I witnessed many amazing nurses and thought ‘hey, I wonder what it would take to do that?’ When I found out I had a nursing program near my own hometown, that’s when I decided to become a nurse.”

After finishing the prerequisites she needed to get into the program, April was accepted and started nursing school in 2006. It was the first year UCC began its partnership with the Oregon Consortium for Nursing Education (OCNE). Two years later, she became a part of the first OCNE graduating class.

OCNE transformed nursing education in Oregon by improving access to bachelor degree programs without forcing students to leave their home communities. Once April completed her studies, she was able to work here in Douglas County while working toward a bachelor’s degree in nursing through online studies at Oregon Health and Science University. It only took her one more year to earn a BSN.

“During that time, I did my practicum at UCC,” she said. “I created simulation lab activities as a student. I ended up working part-time at UCC and at Mercy for four years.”

April ultimately made the choice to become the teacher she once thought of becoming. In 2015, she completed her master’s degree in nursing and returned to the classroom as a non-student. She eventually applied for the director role when it became available and successfully landed the position.

“I am so happy to be here,” she said. “I love this program, the students, the team, and the campus as a whole. I wouldn’t be where I am today without it. Every day is a new adventure.”

As for April’s advice for those interested in nursing, she says “It’s a revered profession and there are many opportunities. If you have it in your heart to help others, take the leap. It’s a tough, challenging program. You won’t be a perfect student. You won’t be a perfect nurse. But that doesn’t mean you can’t be an amazing nurse. It’s all worth it in the end.”