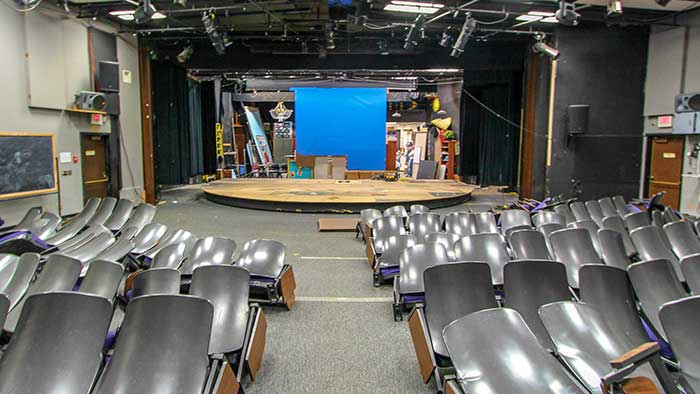 ROSEBURG, Oregon – A conversation around a table has led to some dramatic changes in the Whipple Fine Arts Building at Umpqua Community College (UCC). Thanks to a group of creative minds, some muscle from the College’s Facilities crew, and a generous donor through the UCC Foundation, Centerstage Theatre is getting its first makeover in nearly four decades.

“It’s a pretty special place,” Stephanie Newman, UCC’s Theatre Arts Director, said as she looked at the project midway through its refurbishment. “I fell in love with this space right off the bat.”

“I’m somewhat awestruck that it came to fruition,” she said. “This is a great opportunity for us to rethink how we do our art.”

As the tear-down crew began to work, they discovered a long-buried secret under the stage. The stage was originally built with a driving deck. The motorized feature allowed the stage to move forward toward the audience reaching as far as the first row of seating. However, at some point over the years, the stage motor’s chain gave out and stopped working. To get around the non-working parts, another stage was created over the original stage.

Through this refurbishment, the motor has been rebuilt and is functional once more. The original stage has also returned with new flooring. Along with the upgrades, the theater’s 185 seats will be exiting down stage right. Some of the seats will be making their latest appearance in Sutherlin High School’s music department. Others will be donated to other organizations throughout the community. Moving forward, seating will be updated and customizable depending on the event’s needs.

“There are a lot of “ifs” with transformation,” Newman said. “But this opportunity will allow students and the community to play a role in helping us transform. It’s pretty exciting.”

The cost to renovate the stage and rebuild the motor has been $500. New curtains will be the larger cost, estimated between $8,000 and 10,000. With a new wall being built to suit the stage, along with features allowing for customization between plays and expanded storage units in the backstage area, the total price likely reach around $25,000. The funding will come from the Mildred Whipple Fine Arts Endowment, which was left to the College through a charitable trust in 2014.

The new studio space, located in Wayne Crooch Hall Room 20, is UCC’s former nursing lab. It contains a fully-finished dance floor and mirrored walls. Other features include a staging area, storage, and a small dressing room. The new space will be used for students in the Theatre Arts program and community education courses.