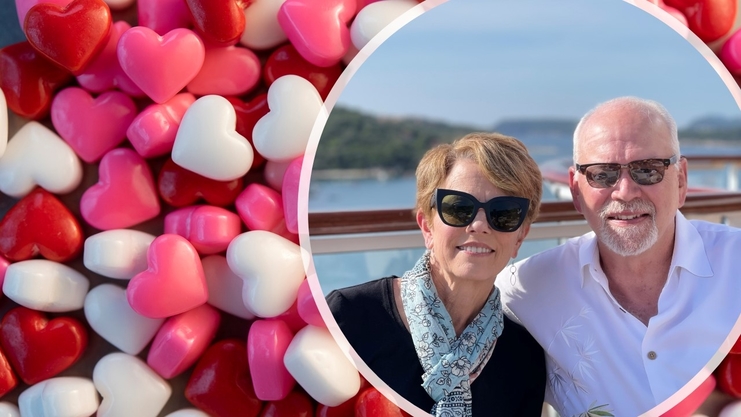 Lee started attending classes at UCC in 1968, the first year the campus was open for class. Lee left UCC a year later to join the Army and found himself on the way to Vietnam as an infantry soldier that fall.  He came home from his tour in Vietnam in 1971 to re-enter UCC after his two year absence. Lee began fall classes in September and had the great fortune to find Robin Hanberg on campus too. Lee remembers the very first time he saw her in the library. He thought he had never seen a more beautiful person in all his life. But Lee didn’t have an opportunity to introduce himself to her. He would catch glimpses of her across campus through that fall and over the winter months but they never spoke.

Then, late that spring of ‘72, Lee walked through the student center’s counseling offices wondering what his plans might be after graduation and found Robin standing in the center of the room with a red and white college catalogue from Oregon College of Education (now called Western Oregon University) in her hands, studying the pages.

As if in a trance, Lee gently pulled the catalogue from Robin’s hands and found himself speaking face-to-face with the prettiest girl in the world. Without introduction, Lee blurted out, “Are you thinking of going to OCE?” Robin didn’t seem too annoyed by Lee’s abrupt interruption as she said, “Yes, I’m going to be a teacher.”

They were both surprised when Lee responded, “Then so am I.”

Lee and Robin found themselves on campus at OCE in the fall of 1972. After several months, Lee “kidnapped” Robin from the dorm cafeteria and asked her out to dinner on the Oregon Coast! That quick trip to Lincoln City and the drive back to Monmouth that evening made Lee think, “This is it.”

Lee and Robin were engaged the following year and married in 1974 as both graduated with their teaching certificates. That was nearly 48 years ago!

As Lee and Robin look forward to another anniversary this coming winter, Lee thanks his lucky stars for that chance meeting at UCC. It has made all the difference. Because of that chance meeting on the UCC campus in the spring of 1972, Lee found the love of his life.   “I’m a very lucky man!” – Lee Patterson 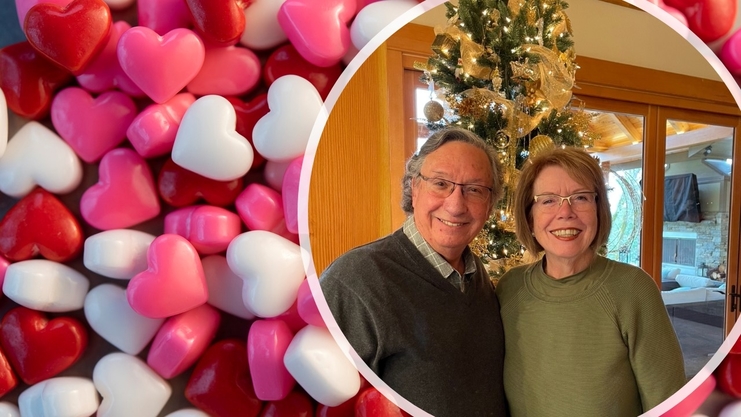 It was 1969.  Sitting attentively in a UCC Accounting Class with a stack of books on her desk, Joanne hears, “Can I borrow your accounting book?” from across the aisle.  Keith was not prepared for class but used that to his advantage to talk to the cute girl next to him.  Keith and Joanne didn’t share another class with one another but bumped into each other on campus from time to time.  Not only was Keith book-less for class, but he was also a poor college student without a lunch most days.  Joanne was always prepared with a delicious lunch and often shared her meal with Keith in her little Volkswagen Bug with a big peace sign on the front.

Joanne and Keith spent a lot of time together with a group of friends from UCC.  Eventually, they went on their first date as a double date to A & W.  It was assumed they were together and about a year later, Joanne and Keith were married.

Keith and Joanne went on to pursue very fulfilling lives together.  They have two sons (Greg and Jeff and four grandchildren) who are now grown and very successful in their own right.  Keith’s career took them all over the nation but the Longie’s love and connection to Roseburg brought them back upon retirement where they now reside and continue to “hang out” with their friends from UCC so many years ago.  Keith gave 41 years to public health services retiring as the Regional Director for Health Services with the US Public Health Service.  Joanne gave 26 years to the National Council for Prescription Drug Programs where she began as their receptionist and retired as a Senior Vice President.

Keith and Joanne are celebrating 52 years of marriage this year and when COVID restrictions make events a little easier, they will celebrate with two other UCC couples who are great friends and got married in 1970 too!  The Longie’s passion for UCC is strong, Keith just became the newest Board member for the UCC Foundation! 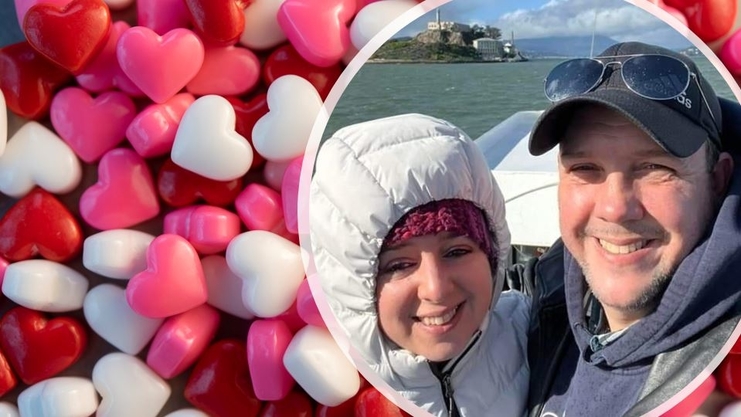 Becky and Jeremy were colleagues and friends long before a romance blossomed.  Becky met Jeremy six years ago while studying at UCC working on her Associate of Arts transfer degree. She was also a student in the Transfer Opportunity Program and was asked by Jeremy Cornish, TOP advisor, if she would be interested in doing some volunteer opportunities. That piqued her interest and she graciously accepted. Working directly with Jeremy as a peer mentor for his students at a local high School, their passion for education and preparing students for success brought them closer together.

Jeremy had a handful of failed attempts to ask Becky out, but after a year she finally accepted.  Becky and Jeremy have been dating for about a year and been head over heels ever since. They enjoy fishing, hiking, exploring, and cooking delicious meals together.  Today, Becky can be found on UCC’s campus supporting the TRIO program and Jeremy is still supporting education at South Umpqua High School.  Even though they don’t share the commute to campus, they still credit UCC for bringing them together and look forward to what the future may hold! 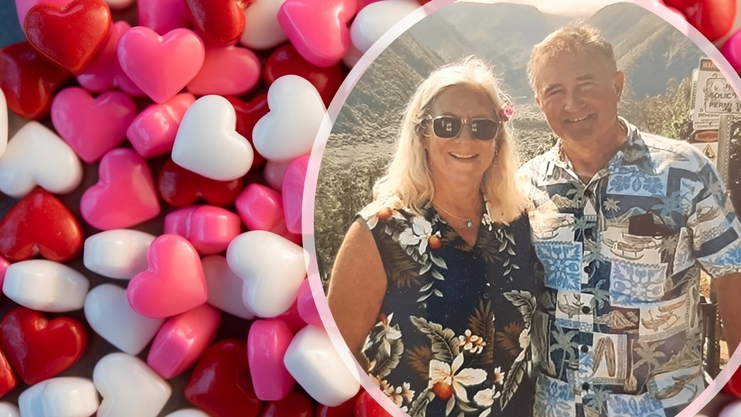 Dan and Cheryl were both long time UCC employees beginning their careers at UCC in ‘85 and ‘86 but the campus, beautiful as it is, can be a bit spread out and difficult for staff to connect.  Dan was serving UCC in the IT department and Cheryl was in charge of all things health and wellness.  It wasn’t until 1994 when Dan was asked to attend a health and wellness conference that they had any reason to connect.  Dan kept Cheryl company in the van on the drive there while everyone else slept and continued working on the health and wellness project that late summer never really thinking “love” as they grew closer.

One day, Dan and his son (13 at the time) were headed out on a hike and Cheryl invited herself along.  Dan thought Cheryl was amazing before the hike, but she captured his heart that day.  They had a great day but when Dan and his son returned home, Dan’s son said, “Dad, we don’t need women in our lives.”  Luckily, Dan didn’t listen to his son and another UCC romance blossomed!  Two years later, Dan and Cheryl were married and are celebrating 25 years of marriage.

Dan and Cheryl continued to serve UCC, chaperoning field trips together when the opportunity arose and often adopting students that needed a little more love.  Cheryl was also the volleyball coach and is still officiating UCC volleyball matches.  Dan and Cheryl are now retired but can still be seen at the UCC basketball games cheering on the team. 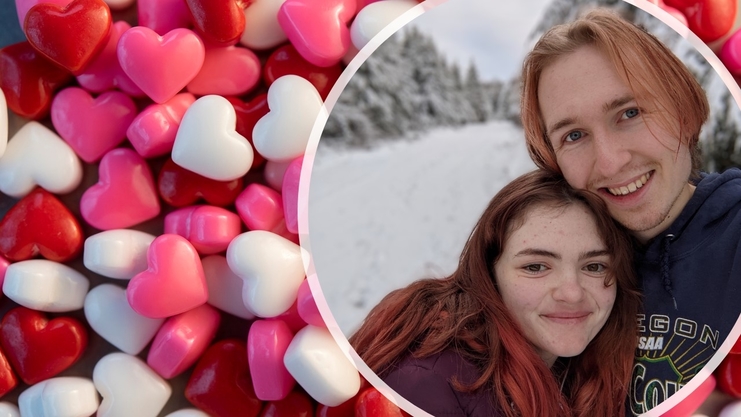 Shortly after their classes began together, Dexter decided to move their friendship to the next level and ask Alexandria out.  They are an official couple of a few months and are enjoying their passion for the arts on campus.  Outside of UCC activities, Dexter and Alexandria enjoy cooking gluten free food, exploring, hiking the beautiful state of Oregon, or just sitting at home with each other, eating tater tots and watching a movie.